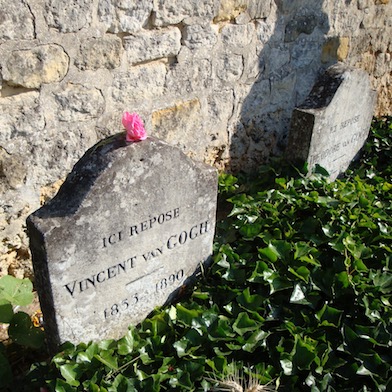 A few years ago, a friend of mine asked me who my hero is. And I said, “Vincent van Gogh.” And she said, “But he was crazy.” And I thought, this guy is still so misunderstood.

Of course, almost everyone appreciates Van Gogh’s art. His writings are also genius. After his death, his family held back releasing his paintings until the volumes of his letters had been published. I’m on my second reading, and I like to give the volumes as presents.

My son first inspired me to study Van Gogh. I was living outside Amsterdam, and he sent me a postcard of Vincent’s Church at Auvers. On the backside he wrote: “Before we see each other next, be sure to visit the Van Gogh Museum.”

Living in the Netherlands, where I’ve read that there are more museums per square kilometer than any other country, it’s natural to immerse yourself in Vincent’s art. It’s also fairly easy to explore the places he lived and worked.

Zundert is where Vincent was born on March 30, 1852. It’s also the location of a church where his father preached and Vincent was baptized. Beside the church is the grave of a baby boy with Vincent’s full name, stillborn, a year to the day before Vincent was born.

On a plaque in the churchyard are Vincent’s words: “Oh, I am no friend of modern-day Christianity. However, the founder was sublime.”

Scheveningen, on the North Sea coast, is where Vincent sat in the dunes and painted Beach at Scheveningen. Several of his paintings from this period have sand dried into the paint. He lived nearby, in Den Haag, where he painted Clasina Maria Hoornik as Sorrow. Sien was an alcoholic prostitute, pregnant, with a five-year-old daughter. And Vincent created a home for them, where she modeled and he babysat, until his family convinced him to leave her. It was as close as he came to sharing a love-life.

Most of the women that Vincent fell for ran the other way, including his cousin, Kee. Desperate to be with her, Vincent held his hand in a candle flame to show her parents how serious he was. But they weren’t swayed. He wrote to his sister, “…still constantly, the most impossible and least appropriate love affairs from which, as a general rule, I emerge in shame and damaged.”

Nuenen is where Vincent lived two years with his parents in the church parsonage. And he used a small shed in the backyard as an atelier. He was a voracious reader his entire life, and he was reading Zola and listening to Wagner during this period. Nearby is the Roosdonck windmill, which shows up in Vincent’s paintings of the thatched-roof house where the De Groot family lived. They were the peasants depicted in his masterpiece, The Potato Eaters. In this period, he made several paintings of his father’s church, including Congregation Leaving the Reformed Church in Neunen, which he painted as a gift for his mother.

In 2002, art thieves stole two paintings from the Van Gogh Museum – the Neunen church and the Scheveningen coastline. During the night, they smashed the security glass, grabbed what would fit back through the hole, and made a clean getaway. Fortunately, in 2016, when Italian police were investigating some suspected Italian mobsters for cocaine trafficking, they discovered the paintings, hidden behind a wall in a toilet of a farmhouse near Naples. And today, the paintings are finally back where they belong, in Amsterdam.

In the Montmartre area of Paris, it’s possible to hold the doorknob at 54 Rue Lepic, where Vincent moved in with Theo, his devoted brother and patron. And a short distance away, Restaurant Moulin de la Galette serves lunch and dinner Wednesdays through Sundays. It’s where Vincent hung out with Toulouse-Lautrec and Pissaro.

Further south is Arles, in Provence, where Vincent moved for the bright southern light. This is where he painted the Sunflowers series, “…in a yellow and blue symphony, symbol of the divine.” He lived in The Yellow House, hoping to create an art community of painters.

By this time, his health was at a crisis. He wrote, “I put my heart and my soul into my work and have lost my mind in the process.”

He’s been posthumously diagnosed with bipolar disorder, temporal lobe epilepsy, personality disorders including hypomania and extreme depression with suicidal tendencies, thujone poisoning from drinking absinthe daily to offset the depression, carbon monoxide poisoning from gas lamps, lead poisoning from ingesting his supplies, eating and sleeping disorders, and malnutrition. And by the time of his death, he’d lost all his teeth.

He checked himself into Saint-Paul-de-Mausole Asylum in Saint-Rémy-de-Provence, after slicing off part of his earlobe during a fit and scaring the townspeople terribly. In a private room on the second floor overlooking the lavender fields, he convalesced and painted Starry Night and The Sower.

Feeling somewhat better, he made his final move, to Auvers-sur-Oise north of Paris, which is where he painted the blossoming yard from Dr. Gachet’s Garden, the lovely church at Place de l’Eglise, and the fields above the town, which were the setting for Wheatfield with Crows.

By this time, there was good news and bad news. He’d been invited to exhibit his paintings in Brussels and had sent six paintings, including Irises and Starry Night. Plus his only sale had occurred, The Red Vineyards, for 400 francs. But Theo was growing a family now, and he told Vincent that finances would need to be stricter.

Auberge Ravoux Inn, where Vincent lived and took his meals during his last two months, serves lunch March through November. The restaurant has kept its 19th century atmosphere and serves food reminiscent of Vincent’s time. And from the inn, it’s a short walk to the wheat fields where Vincent’s believed to have shot himself.

Another theory (initially put forth by Steven Naifeh and Gregory White Smith) is that he regularly drank with two teenaged boys – and that one of them had a malfunctioning gun and accidentally shot Vincent that day. Facing death, it’s thought that Vincent may have decided to let the boys off the hook, by saying he did it himself. In which case, he would’ve let his brother off the financial hook, as well.

Attic room #5 is where Vincent died on July 29, 1890. In the town cemetery next to the wheat fields, Vincent’s grave lies beside Theo’s, who died six months later from syphilis.

Today, Vincent van Gogh is considered the greatest Dutch painter after Rembrandt. He completed more than 2,100 works in less than ten years as an artist. And his Portrait of Dr. Gachet sold in 1990 for $82 million.

I’ve felt compelled to visit all these places. And I’ve dragged my husband, Ron, along as well, sometimes not telling him ahead of time that our vacation destination was another quest to walk where Vincent walked.

I thought I was alone in my fixation until I read about a busload of Japanese tourists who stood outside the Van Gogh Museum, all of them sobbing, because it was closed for renovation. A few years ago, I was sitting in my son’s living room, and one of his friends told the story of how a friend had snuck down the chimney of Vincent’s atelier behind the Neunen parsonage. And I wished I’d had the nerve! I only got a cutting from one of the trees.

Why are so many people affected by this guy? For me, I’m awed by how his nontraditional spirituality influenced everything he did. He wrote, “To believe in God for me is to feel that there is a God, not a dead one or a stuffed one, but a living one, who with irresistible force urges us towards more loving.”

Vincent was born into a family of preachers and art dealers, and his initial plan was to answer a personal calling by joining the ministry. He began by teaching in a Methodist boys’ school. In addition to the classes, he attended church daily, frequenting various denominations. He taught Sunday School, and he gave sermons as a lay-preacher. And all the while, he was translating the Bible into multiple languages and painting Biblical scenes on the walls of his rooms.

He studied theology in Amsterdam, but was considered unsuited for the profession, because of his awkward social and ministerial skills. So he volunteered as a missionary in Belgium, dedicating himself to the sick and poverty-stricken. Following a local mining explosion, he gave the affected families everything he owned, eventually dressing in rags and sleeping on the floor of his room. But the church committee was shocked by his zeal and fired him for preaching poorly and dressing inappropriately.

The strenuous labor, combined with the church fathers’ rejection, resulted in Vincent’s first nervous breakdown. And following that experience, at age 27, he finally decided to try his hand at becoming an artist. He wrote, “When I have a terrible need of – shall I say the word, religion – then I go out and paint the stars.”

It was a path filled with loss and loneliness. Life beat him up. In the midst of it though, he was able to see something divine in nature and also in the routines of daily life. And he used big strokes and masses of paint to present it on canvas.

“What am I in the eyes of most people – a nonentity, an eccentric, or an unpleasant person – somebody who has no position in society, and will never have. In short, the lowest of the low. All right, then – even if that were absolutely true, then I should one day like to show, by my work, what such an eccentric, such a nobody, has in his heart. That is my ambition, based less on resentment than on love, in spite of everything. Based more on a feeling of serenity than on passion. Though I am often in the depths of misery, there is still calmness, pure harmony and music inside me. I see paintings or drawings in the poorest cottages, in the dirtiest corners. And my mind is driven towards these things with an irresistible momentum.”

Vincent took a torturous life experience and used it for good, never losing faith in the magnificence of people or the world. Instead of becoming bitter, he turned his torment into beauty.

“It is good to continue believing that everything is more miraculous than one can comprehend, for this is truth. It is good to remain sensitive and humble and tender of heart. For what can one learn that is better than what God has given by nature to every human soul – which is living and loving, hoping and believing?”

He also modeled a dedicated life, where passion calls and then fuels everything that’s thought, felt and then acted out.

“Your profession is what you’re put here on earth to do, with such passion and such intensity that it becomes spiritual in calling.”

My son explained it further on the back of the postcard he sent, inspiring me to fall in love with Vincent. He wrote: “Being able to view more than 200 paintings, by one of the most amazing people who ever lived, ranks way up there on the religious experience list.”