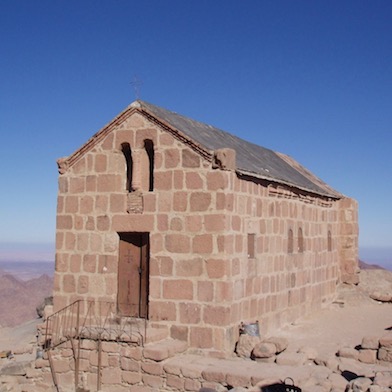 Utrecht is a medieval city in the Netherlands, known for its centuries-old city center and its lively cafes and terraces at water level along the canals. Records show that in 47AD, Roman emperor Claudius had a fortress built on the Rhine River, and it eventually grew into Utrecht. During the Middle Ages, it was a religious center of the Netherlands, with dozens of church towers making up the skyline. Today, eight of those medieval churches remain, including the Buurkerk (the neighbor church), built in the 10th century.

I live nearby, and over the years, I’ve walked, biked and canoed into Utrecht. Recently, I went in by bus to take a look around. While wandering through the Buurkerk, I was fascinated to discover that an Anchoress had lived there in the 15thcentury. Sister Bertken was the illegitimate daughter of a priest. And at age 30, she requested permission to be walled up in a corner of the nave, where she remained 57 years until her death in 1514.

Sister Bertken’s space had three small windows and no door. One window was high in the exterior wall to let sunlight in, another was used for physical needs like nourishment and hygiene, and the last was used by congregation members to communicate with her. Her only furniture was a chair, a desk and a mattress. She lived barefoot in her unheated cell and ate a frugal diet. And she spent her time meditating, praying and writing.

Since I crave at least eight hours of alone-time a day, when I saw her spot, I was like, “Sign me up!” Of course, when I told my husband, Ron, about Sister B, he thought my response was overly radical. He was like, “There’s no way I’m gonna bike into Utrecht every day to relate to you through a window in a stone wall.” This coming from the guy, who spent a below-freezing night, futilely trying to sleep, wrapped like a burrito in an old worn rug, on the floor of the drafty chapel on top of Mt. Sinai.

It is a curious choice. Why do ascetics set themselves apart? And why the need for self-denial? And how far is reasonably far enough?

And what about those of us who just need an occasional break from this unrelenting 24/7 world? What do we expect to find when we enter an empty room to meditate? Why do we close our eyes and go inside ourselves to find answers? What is it that we don’t seem able to find in the busy outer world that we believe we can find in an isolated inner world?

IS THIS ALL THERE IS?

Many of us are currently experiencing life-changing events, amid a global wave of divisiveness, loss of resources and direction, and a fear of “What’s next?!”

Two years ago, one of my friends had the career rug “pulled out from under him.” And, though the circumstances were challenging, he made a promise to himself to not go negative. He decided to buy a pizza oven and master the perfect dough. He learned how to bake bread and began delivering loaves to his friends. And he went back to meditating daily, something he grew up with but hadn’t done regularly in the last decade while working in the corporate world. He turned inside himself to get insight for making sense of the situation, and to find calm and peace-of-mind, and to connect with real value.

We tend to spend our lifetimes accumulating what we believe matters. We achieve the education, the career, the power, the money, the house, the family, the popularity, the image and the good reputation – all the things that society tells us we’re supposed to do and get. And still, sometimes we reach a point in life where we look at all the stuff, and we’re certain that we did all we were supposed to do. And yet, there’s a feeling that, “This isn’t really satisfying me anymore. I don’t feel fulfilled.” We miss meaning, and we long for something that matters more. And we ask, “Is this all there is?” Something inside us wants to grow and to express in a new way, and to have a new source of wisdom in order to go forward.

A NEED TO CONNECT WITH ORIGINAL INTENT

The need to understand who we are, why we’re here, and what we can contribute is a deep-felt driver for many of us. And it leads us to look beyond what we can accumulate and accomplish. Instead of identifying with what we do, it brings up questions, such as: “Which aspect of my expression is my intrinsic self?” and “How can I reconnect with my origin?”

Throughout history, there’ve always been enlightened people, showing up in all the races, cultures and nations, expressing different beliefs and faiths. We’ve called them saints, mystics, wise men, prophetesses, psychics, healers and miracle workers. A common point is that they didn’t seem to lose sight of who they were originally. And they made a difference in the world, by adding to the quality of life and by demonstrating a source of inspiration. What set these people on fire? And what was the source of their wisdom?

Throughout the decades that Sister Bertken spent walled up in her Anchoress cell, members of the congregation regularly showed up outside her tiny third window, seeking her wisdom and blessing. They believed she had a connection to a source of knowledge that they perhaps didn’t, a higher intelligence than what they could access. And she became an oracle in her time. What was Sister B’s secret? She seems to have relied on inspiration through thinking intuitively.

Most of our conscious thinking is linear and sequential, meaning that each thought is a conclusion drawn from a previous one. From early in life, we learn to make observations, assess comparisons and draw conclusions based on what we’re experiencing, especially through our senses.

A different direction from linear is vertical communication, where our thoughts seem to descend from out of nowhere. They’re not related to what we were thinking previously, and they’re not conclusions that we figured out.

Thinking vertically means switching from the logical, deductive, conclusive process over to intuitive inspiration, at will, by way of a disciplined mind. The word inspiration comes from the Latin inspirare, which means to blow into, to breathe upon, to animate. It’s as if the thought descends and lights upon us. It feels like a calm awareness of truth, an inner knowing that feels peacefully evident.

Thomas Edison used to sit in a chair until he felt so relaxed that he dropped a set of brass balls resting in his hands, and then he asked his question, expecting the answer to come from inside. Mozart said he didn’t compose music – instead, he listened for it. Albert Einstein liked to observe cloud patterns, while waiting for an answer to come from inside himself, believing that “imagination is more important than knowledge.”

As we grow out of childhood, we tend to develop logical thinking at the expense of our intuitive thinking. If we can’t see it, touch it or feel it, it’s “just our imagination.” And as adults, we rely less on our intuition and learn to look outside ourselves for our answers – even though we have constant access to an intuitive intelligence inside us that can be a source of functional guidance.

HOW TO RECOGNIZE AN INTUITIVE THOUGHT

Most important to know about linear thinking is that it allows fear to get inside our heads. And it causes us to be worried, afraid, sick, incapable, paranoid, judging, blaming – all the unsupportive emotions.

Everyone follows guidance – and should, in order to be effective. The question to ask is: “What voice am I listening to for my guidance?” Whether the voices are originating inside our heads or coming from the people we interact with daily, it’s simple to sort them out, because they are basically of two types.

The voices come from either love or fear. And the way to tell the difference is this. The voices from fear are always degrading us, limiting us and warning us. And they never tell the truth, which means worry-voices are never correct. The voices from fear make us feel afraid, they convince us that we’re inadequate, and they become the boss of what we can and can’t do. It’s called unsupportive self-talk. On the other hand, our intuitive intelligence will never beat us up.

THE VOICE OF ILLUMINATION

It’s likely that there will always be ascetics, and they’ll continue to make mind-boggling choices, beyond reason and understanding for most of us. Only they know whether their decisions to adopt an isolated, frugal lifestyle turn out successfully for them. Hopefully, Sister Bertken remained confident and peaceful while living out her choice.

I’m betting though that our need and desire to stay connected to our original, intrinsic self doesn’t depend on such radical steps. The messages of intuition, inspiration and illumination come when we’re in that quiet inner place where truth is the loudest. And they’re easy to recognize, because they have the qualities of love. That means they’re supportive of us, of our effectiveness in life, and of our ability to accomplish whatever we want. They cause us to feel capable in our relationships, our health, our career and our prosperity. And they encourage our belief that we can handle whatever comes along.

The chatter going on inside our heads is often happening at such a furious rate that the guidance coming from our intuitive intelligence can’t get through easily. So yes, it can take a decision to isolate, to set the world aside, in order to shut down the linear conversation for a while. It means quieting our racing minds and our fidgeting bodies in order to listen inwardly. And then an intuitive and inspirational thought can get through. And it will be a loving thought, produced by who we truly are.

If we do that regularly, we can build a functioning bridge between our conscious awareness and our intuitive intelligence. And in that way, we’ll always have access to the answers we need, and to the inspiration that animates our way forward.

When we enter an empty room, when we close our eyes and turn inside ourselves, when we return to our inner world, the truth of who we are can encompass us in the quiet.