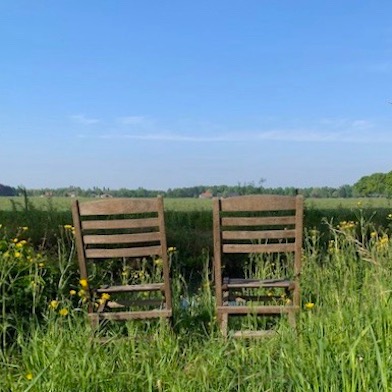 I was sitting in our yard one day when my seven-year-old son came out of the house and sat beside me. I kept looking at his face, thinking something looked different. Then I realized he’d shaved off his eyebrows. And I was really at a loss for what to say to someone who prefers not to wear eyebrows.

Gifting feedback means knowing how to talk to people in a way that they can hear, while remembering that people don’t hear the answer to a question they didn’t ask.

The beauty of this tool is that no one is made wrong. And it’s solution-oriented rather than leaving the person hanging out there feeling wrong, discouraged and alone.

Getting feedback also has specific steps to follow. A couple years after the eyebrow-shaving incident, my son wanted to get a tattoo of a lightening bolt. I said No. And then we found a compromise. He decided a lightening bolt shaved above his hairline would also work. So off we went to the hairdresser. Afterwards, almost everyone who saw him made fun of him by asking why he had a Z on the back of his head. And he learned about living with the consequences of his choices.

When we’re receiving feedback from people, it helps to remember that what they say is usually based on their beliefs and interpretations. Even so, there’s always something to be heard, though it takes a strong sense of self and personal value to listen well.

The people best qualified to give us helpful feedback are the ones who know us best. And that’s usually our partners, parents and siblings – and especially our children, because they’ll give us the least colored truth if they feel safe to do it.

Being able to give and receive feedback effectively takes a balance of caring deeply about people, while not placing too much value on how they express themselves.

My son with the Z and the missing eyebrows expressed both, as he grew older. He managed to not react to the criticism from his peers when his high school principle sent him home for wearing a self-made skirt to school. And following graduation, he trekked off to Ethiopia as a volunteer, digging water wells in remote villages. It was a nice combination of not caring too much about what other people think, while caring deeply about how others feel.